The share of Americans not having sex has reached a record high, told us a Washington Post analysis by Christopher Ingraham:

Stunning chart: the share of men under 30 who aren't having sex has nearly tripled in the past decade https://t.co/0aazxCijYP pic.twitter.com/HVVmffy7Jc

The crudeness of the data, which also illustrate a growing gap between men and women, has been diluted with the dullness of interpretations, mostly centered, as expected, on the miseries of masculinity: it’s the fault of video games, mama’s boys, pornography, drugs, unemployment etc.

Psychologist Jean Twenge, for istance, addressed the facts that “labor force participation among young men has fallen” and “young men also are more likely to be living with their parents than young women”: of course, but… the survey concerned the frequency of sexual relations and not the “stability” of them. The picture emerging is therefore much more disheartening than it may seem, and as the “sex gap” between men and women widens, it will be less and less easy to go after the herbivore men. 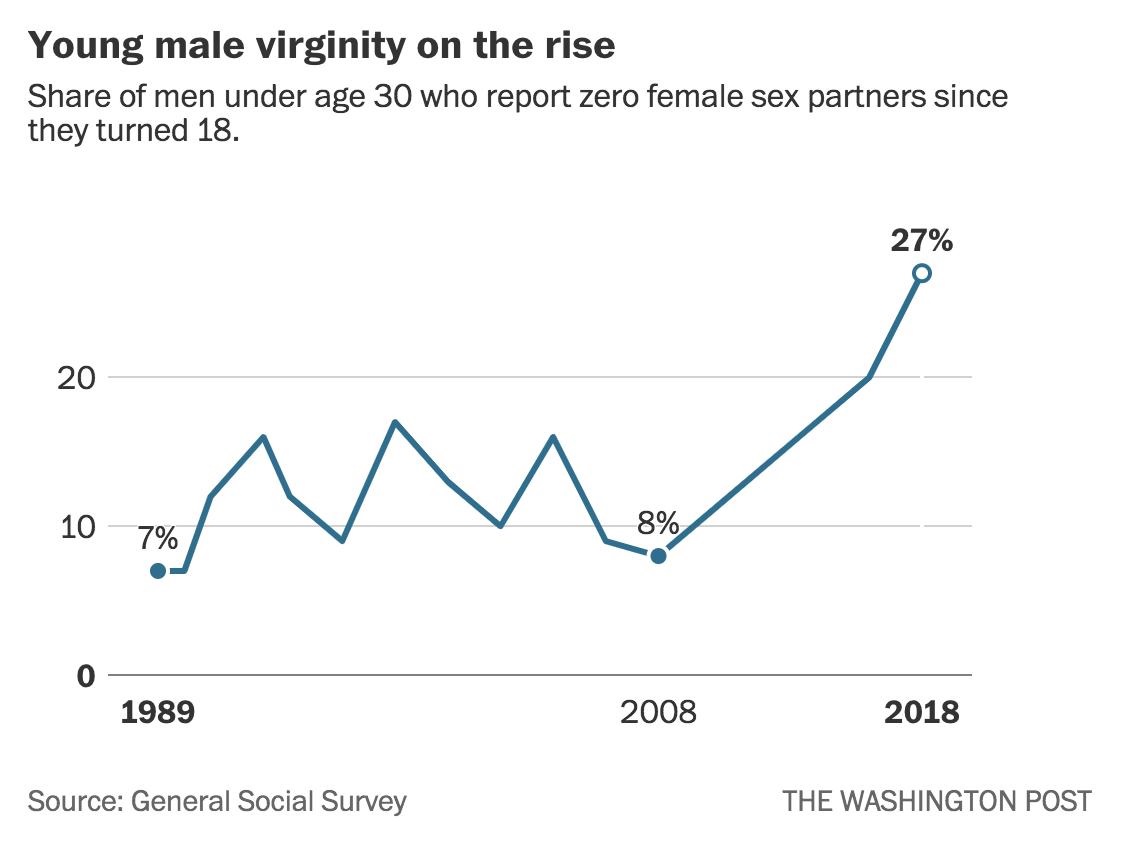 The reasons behind the collapse are endless, but surely it is less ridiculous to point out the destruction of marriage or the uncritical exaltation of femininity, rather than laying guilt only on males. In all honesty, the question could even be reduced to a single word: hypergamy. The reason why the West until yesterday counted societies in which was possible to live in dignity seems to have something to do with curbing female hypergamy. Even the demographic crisis, with the benefit of hindsight, seems to depend less on factors linked to the improvement of the general conditions of the population and more on this inalienable trait of female nature (as Stefan Molyneux stated: “Western women’s insanely high standards are killing the birth rate”).

Once the root cause for which male virginity in the United States is setting new records has been clarified, a doubt might arise as to why female hypergamy has become in such a short time the only criterion regulating relations between the sexes. A more “optimistic” interpretation (so to speak) could lead to believe that this is due to the pounding propaganda to which women are subjected daily, the one that is “forcing” them to expect only the best in any field.

However, there is also the blackpilled interpretation, which sees the current generation of males as the first to enjoy the “privilege” of discovering the true feminine nature (comments from r/Braincels, now banned):

“Before the sexual revolution of the 70’s, women didn’t exist. The fantasy of women (loyal, empathetic beings) was maintained through a strict patriarchy and gender roles. When these broke down, we realized that we have never actually seen a woman before. Women were given whatever traits men wanted them to have, and men assumed this to be natural, but now we see that they’re simply projections of the perfect match to male sexuality and not their natural state. We are gynonauts. First explorers into the vast abyss of the female mind…

We still haven’t seen them completely, they are still held back a lot by social shaming and expectations, etc. Look how desperate they want to be naked 24/7 like an animal but most still don’t have the guts to do it yet, but they’re all still way more naked than girls 100 years ago. They are honestly very similar to female chimps. A real human woman wants to chill out naked all day, get fucked many times a day publicly by the top males, incite violence against the lower ranking males if they’re not bringing in enough food and then sometimes out of pure boredom, have babies and play with them in a big group with the rest of the females, and have everything catered to them.”

Probably this is the only likely conclusion (albeit a bitter one): all that boring stuff like marriage or religion were not just prehistoric superstitions, but “cultural technologies” created for the purpose of safeguarding our species. As another anonymous redditor on r/Braincel noticed,

“The atheism will get people more sex was a huge meme in the early 2000’s, coinciding with books like The Da Vinci Code. Leftists were pushing hard the propaganda that the Church was behind people not having sex. Men fell for it hook line and sinker, swallowed the atheism poison pill, and ended up with even less sex and non stop rising male celibacy from 2012 onwards. The funny thing now is you don’t even need to join priesthood to be a celibate. Celibacy is now free on tap, courtesy of your sex positive SJW’s tee tee hee.”

Now that everything has collapsed, we observe the emergence of “primitive horde” dynamics made even more wild by the ultra-modern context in which they are imposing themselves. Even today’s “masters of the world” are at least aware of the problem, as they talk on The Economist as to Why polygamy breeds civil war (“When large numbers of men are doomed to bachelorhood, they get desperate”), despite the fact that they they just focus on Third World Countries; or as they organize meetings in Davos on the Loneliness Epidemic, whilst steering the debate towards social networks, gamers and right-wing politics.

We tought that the Celibacy Question was just a Chinese problem, but now that we are authorized to talk about it in public (although in some euphemistic way), it means that the issue is more serious than expected. Can we at least acknowledge that sexual revolution has failed, therefore the solution is not to spread some more libertinism among the masses? And even if we think sexuality as part of a good consumer options (as we have been doing for decades now!), legalizing some “politically incorrect” things like prostitution or sex robots, this won’t solve the problem spontaneously. Sadly for liberals, feminists and progressives, the issue is 100% political and has a lot to do with a conservative idea of society. Unless it is faced with realism (even from a geopolitical perspective: can the world afford two superpowers, USA and China, in the form of “Incel Empires”?), once again nature will have the final say on culture and ideology.

“In desperation, many single men resort to extreme measures to secure a mate. In South Sudan, they pick up guns and steal cattle from the tribe next door. Many people are killed in such raids; many bloody feuds spring from them. Young bachelors who cannot afford to marry also make easy recruits for rebel armies. If they fight, they can loot, and with loot, they can wed. (The Economist, March 19t, 2018)