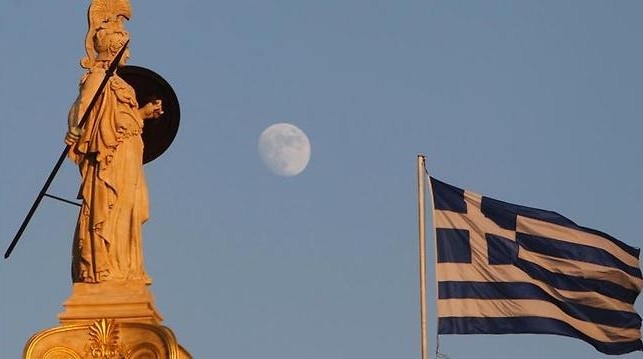 Having said that, I would like to propose an alternative interpretation of the disaster in which Greece was dragged, leaving aside any economic consideration: moreover, it’s the opinion of many that “Greece could be saved”, but that nothing has been done, for reasons that apparently ordinary mortals cannot understand.

It seems that from the perspective of those who created this Europe, even the idea of ​​”Greece” should be canceled forever. In a few lines I will try to give some explanation for this conjecture, in order to not appear as a conspiracy theorist.

Let’s start with this: my generation is almost unable to understand what Greece really is. It largely ignores the reasons why Athens is considered the cradle of civilization and why until recently Plato and Aristotle were considered the “secular saints” of the West. On the other hand, thousands of my peers have visited the sacred homeland of philosophers several times: to fight in the war of independence against the Ottoman Empire? To revere ancient gods? None of this.

Herds of young Westerners have gone to Greece to get laid and have fun. Anyone who has not been a teenager in the first decade of the 21st century will think that I’m naively emphasizing a passing phenomenon, which in no way can be considered “epochal”. Since Greece entered the European Union, the image of this nation was reduced to Mykonos, the “island of perdition”, a European “Thailand”, a cheaper “Ibiza”, an “Aruba” a stone’s throw from home: in the collective imagination this has become Greece.

Clearly there are those who remained immune to the myth, like some student in Athens who, with an enormous effort of will, preferred to go to Delphi instead of taking advantage of the super-cheap offers to sail to the most convenient pseudo-brothel in Europe (to explain that, economists would reduce our spiritual heritage to “cultural industry”).

The catastrophe is therefore anything but “financial”: after all, not only the notorious “Judeo-Christian roots” were eradicated from the European Constitution, but also the Greek-Latin ones. Latin wisdom reminds us that piscis primum a capite foetet, in our case that the culture war against Greekness have a certain familiarity with the imposition of technocracy as the only political model for the European Union. If you wish, you could go back to an even smelling fish head, that of the academic world, from which arose in recent decades the tendency to diminish the Hellenic contribution to Western culture, by “diluting” it in the context of myth and irrationalism.

It is a vague sensation, not entirely definable, but that transpires from different sources. For example, in the beginning of the History of Philosophy by Giovanni Reale and Dario Antiseri (2008), the two historians denounce, speaking of the past, a current attitude:

“The Neoplatonics of the last phase argued that the doctrines of the Greek philosophers would be only elaborations of conceptions born in the East and originally received by Eastern clerics for divine inspiration of the Gods. […] The thesis of the oriental origin of philosophy found credit in Greece only when philosophy had by now lost its speculative vigor and self-confidence, and sought its foundation and justification no longer in reason, but in a superior revelation”.

It is a thesis that, as we mentioned, is more current than ever: in Italy we see the academic effort to transform Platonism into a ramification of Asian mysticism. For example, Giorgio Colli brought the Nietzschean dualism (Dionysian vs Apollonian) to the extreme and dissolved the Greek character in spurious mysticism, ecstasy and “shamanism”. In fact, he wrote in his work The Birth of Philosophy (1975): “Apollo is not the god of measure, harmony, but of possession, madness”. Even the national divinity of the Greeks becomes an avatar of some Asian deity.

Where even Nietzsche had not dared to go (perhaps for a residual, philological modesty), we find a host of interpreters of Greekness as amorality and irrationalism: Simone Weil, who opposed graecitas to romanitas in the name of an improvised Gnosticism; Karl Löwith who, writing to Leo Strauss in 1946 (Dialogue on modernity), became intoxicated from the myth of Hellenic libertinism: “For the Greeks it was quite natural -and I praise them for this- to have relationships with women, children and animals”, provoking the annoyed response of his interlocutor: “Please read the Laws of Plato on this subject”. In the same milieu we found those ideologues which in the name of homosexual propaganda issued the nefarious equation “Greek philosophy” = “practical and theoretical pederasty”, making Platonic studies a branch of gender ones.

We can also observe that the war on Greekness has basically followed the same path of the war on Latinity. The greatest achievement of anti-Christian though was precisely to separate ancient philosophy from Christianity, after the West had taken centuries to make it a single tradition.

Eric Voegelin in several of his works is not afraid to reconstruct the ways in which Christianity saved Plato and Aristotle from the fall of the polis, giving their anthropological truth a soteriological foundation, which then produced the stunning architecture of Thomism. Our Christian roots, for this reason, are also Greek and Latin: Justin Martyr was the first to establish a comparison between Socrates and Christ (and between the death of Socrates at the hands of idolaters and the torture of Christians): according to the Martyr, the Greek master knew the Redeemer in form of Logos. This only to mention the immediate affinity that arose between Greek culture and nascent Christianity: the same sympathy that, among other things, provoked the reaction of the Neoplatonics (who, failing to explain that miracle of inculturation, preferred to counterfeit the teachings of their forefather).

These observations lead back to the initial hypothesis: everything that is Greek, in the positive sense of the term, must be eradicated. It is not enough to alter and deform the teachings of philosophers, since this too could lead, through a reading without prejudices, to the rediscovery of the true European tradition: we must simply take them out, or confine the “Greek miracle” in the archaic lands of an imaginary Asia, for example by attributing the discoveries of Archimedes and Euclid to the Assyrian-Babylonian civilization.

Reale and Antiseri annotations help us to understand why Greece, in the new technocratic and globalist paradigm, must disappear forever:

«The Greeks gave civilization something that it didn’t have […]. Without keeping this concept in mind, it is impossible to understand why the civilization of the entire West took a completely different direction, under the pressure of the Greeks, from that of the East”.

This is the crux of the problem: there is no longer any need for Greek “diversity”, now the world must be unified through economics and technology. The Roman empire appropriated Greek culture to the point of making it an ideology of state: in this Europe, however, there’s not even a Horace ready to recognize that Graecia capta ferum victorem cepit. Beyond so many words, this is a lethal eradication for our civilization.

Hegelian Recognition (Welcome to the Friendzone)