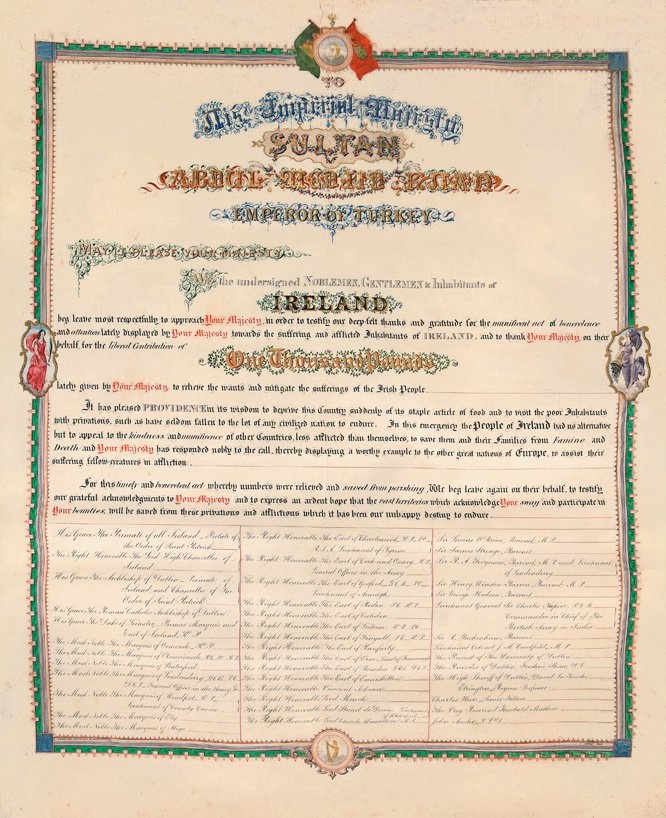 The Letter of Gratitude to Sultan Abdulmejid from Ireland for the Ottoman Aid During The Great Irish Famine, 1847 pic.twitter.com/njsnNT22ib

Some doubts about the Letter of Gratitude to Sultan Abdulmejid from Ireland for the Ottoman Aid During The Great Irish Famine, 1847, just celebrated by Turkish Ambassador in Dublin. From Reddit (sorry):

There was no blockade of relief ships to Drogheda (nor is it possible to substantiate about whether any secret ships of food were sent – the Sultan talked about his generosity during the famine but only mentioned the money. As the money went through the ambassador of Constantinople and then the British relief association, it would be unlikely for him to intervene in a more direct manner, especially as one of his explanations for his provision of aid was his ties to the Queen and the British government).
It was a myth that began in the 1880s under Charles Stewart Parnell (leader of the Home Rule Party) who first claimed Victoria was the only European monarch not to give any of her private wealth to help the Irish (in the example he emphasized the contributions of the Tsar of Russia and this Sultan) which are fairly easy to refute, she gave the modern equivalent of £62,000 in the most publicized 1847 donation, and gave smaller sums on other occasions, making her the largest individual donor during the famine.
Parnell was also the source of the ship myth. The story goes the ships were blocked from landing at Dublin. There are no records of such a blockade (which there would have been as it would be a military and legal matter) or of ships diverting to Drogheda, there is instead a ton of evidence of relief ships arriving in Dublin. The British government actually paid the freight costs of relief ships (from any nation/source) to encourage them to come and they came from all over the world. While the British government should have done far more they didn’t block aid.
Source is the book Charity and the Great Hunger in Ireland: The Kindness of Strangers by Christine Kinealy which looks at the different sources of relief and charity. Victoria’s donation was intended more to raise the profile of the British Relief Association, she was fairly high profile in making multiple days of prayer and a day of fasting to encourage the campaigns for fundraising and donations, with a queen’s letter read out in every church about the famine, through two letters around £70,000 was raised. She also raised money through private fundraising in 1848 after the famine was declared over (it wasn’t). I don’t know the modern value but in the millions, I suppose. Aside from being the largest individual donor in financial terms, she was therefore probably one of the most important individuals in terms of raising money – which isn’t to over praise her, she was queen and it is therefore entirely natural of her to use her position in this way.
She faced a lot of criticism with vicars not wanting to read the letters out or encourage a day of fasting because of their poor parishioners not being able to afford to eat – while Victorian era poverty was deadly without a doubt, I imagine racism and a lack of true understanding of the devastation of the famine was underlying. There is also the truth that Victoria could have donated more, and more money in total came from ordinary British families in poverty than from her. Even when she discussed the famine to raise money (such as on the opening of parliament) she often used prejudiced stereotypes about the Irish such as such as suggesting the famine was causing violence in Ireland.
The Sultan was widely praised. The money was given to the British ambassador and then went to the British relief association. He was instrumental in the abolition movement in Turkey and intervened during the Damascus blood libel case which saw Jewish community leaders being accused of the murder of Catholic priests. Ireland also received aid from India, Russia, most European nations, the US (Quakers in particular), China, Australia and Brazil. Many very very impoverished people, including those who had escaped slavery in the US, donated.

In The Light, We Are One

Xiongnu: The origins of Turkish civilization

Nazism is female sexuality as an ideology