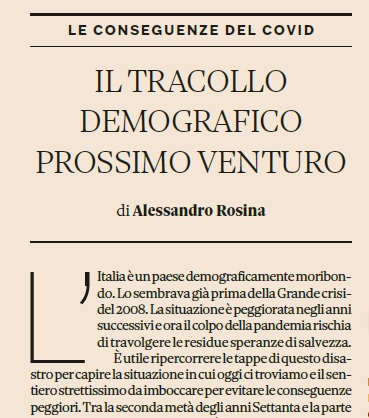 It is useful to retrace the main stages of our country’s demographic disaster to understand the situation in which we find ourselves today and the very narrow path we have take to avoid worst consequences.

Italy becomes a demographically moribund country. It already seemed so before the Great Recession of 2008. The situation worsened in the following years and now the pandemic outbreak is overwhelming the remaining hopes to straighten up.

It’s helpful to retrace the main stages of our country’s demographic disaster to understand the situation in which we find ourselves today and the very narrow path to take to avoid worst consequences. In just over a decade, between the second half of the 1970s and the last part of the 1980s, Italy went from a number of children per woman higher than the EU average (even more than France) to the lowest level in the world.

Births, which had never dropped below 800,000 before 1975, sink around 550,000 from the middle of the following decade onwards. This sudden collapse had repercussions on the age structure of the population. In the mid-nineties, Italy became the first country in the world where people under the age 15 were overtaken by the over 65.

Italy enters the new century as one of the countries with the most unbalanced demographic structure, so much that in November 2005, in a special report dedicated to the country, the Economist wrote:

‘Italy’s demographics look terrible. The country has one of the lowest birth rates in western Europe, at an average of 1.3 children per woman, and the population is now shrinking; yet Italians are living ever longer, so it is also ageing rapidly. The economic consequences—too many pensioners, not enough workers to maintain them—are worrying enough on their own.’

Rather than reverse course, condition had worsened further with the Great Recession which marked the transition between the first and second decades of the 21st century. So much so that starting from 2015 the Italian population begins to decrease, anticipating a negative trend that the Italian National Institute of Statistics forecasted on 2011 only from 2042.

According to these forecasts, moreover, births had to remain always above 500,000, while in 2014 the actual figure had already slipped below this level. The rest of the decade continued with each new year shifting the negative record of births of the previous year down to the value of 420,000 in 2019. In that year the average number of children per woman was 1,29, very close to the 2005 figure taken from the Economist.

Therefore, no improvement compared to the scenario than outlined, but in the meantime the low fertility has continued to weaken the basis of Italian demography, with people over 65 further increased, so much so as to foreshadow the overtaking of this last component even on the under 25. But it should also be considered that compared to an average number of children per woman similar to 2005, the number of births in 2019 is significantly lower (130,000 fewer). This is because meanwhile, due to persistent denatality, the number of women of child-bearing age decreased. If the Italian demography was “terrible” fifteen years ago, how to define that of 2019? And we already know in 2020-2021 we will have worse data.

We went into the the pandemic outbreak with one of the lowest fertility rates in Europe and one of the most consistent reductions in women of child-bearing age, but also with greater uncertainty in the the new generations about the plans to start a family. The NEET (Neither in Employment or in Education or Training) rate between the young people (25-34 years) was 23.1% in 2008 at the beginning of the Great Recession, while it is equal to 28.9% in 2019, on the eve of the current pandemic (compared to a European average of 17.3%). The average number of children per woman also starts from lower levels both compared to the previous recession (1.29 against 1.45 in 2008) and compared to the European average (around 1.55).

Italy suffers a stronger impact from Covid-19 both in terms of lethality (due to the fragility of the elderly population) and short and medium-term social and economic consequences as a result of youth unemployment. The fears of a further decline emerged very clearly from a survey, promoted by Istituto Toniolo, during the lockdown (between March and April 2020). At that time, almost half (49%) of the interviewees, between 18 and 34 years, declared that they saw their current or future work more at risk than before the COVID-19 outbreak. In a second survey six months later, after the peak of the spring emergency and before the second wave of the pandemic, 55% of the respondents see their life plans at risk.

More specifically, among those who planned to have a child at the beginning of 2020, in the survey conducted in March it was 44.4% who confirmed the desire to make this choice by the end of the year, while the majority declared that they want to ‘review their plans’ (postponing: 29.3%, or giving up for now: 26.3%). In October the situation did not improve, if not for a tendency more to postpone (36.6%) than to give up (21.2%). These data lead to think that births will decrease in 2020-2021 in comparison compared to 2019. The results of some simulations provided by the National Institute of Statistics on the negative effects of the pandemic on births are also consistent with this situtation, which foreshadow a drop below 400,000 the next year.

The war on coronavirus in Italy